Last Monday, I visited a client in California. Their programmer showed me some code he'd been working on and mentioned that he was having some difficulty with rounding errors accumulating.

I shared a technique with him I've used to solve the same problem.

Having way too much time in airports and on planes to think about it, I realized that the method I shared, while quite good for most cases, fails to allocate rounding errors fairly in extreme cases. I spent many hours since trying to find an optimal solution.

Consider the problem of distributing money, evenly, across three accounts. If we only have one cent to distribute, which account should get it?

Using the naive rounding method, none of the accounts will get anything and we will be left with one cent undistributed.

This works well for any number of accounts ensuring that the maximum rounding error applied to any given account is less than one cent.

I spent a lot of time working on a fair method for distributing the rounding errors. I'm certain I spent my time simply reinventing the wheel, but it was a very interesting problem to solve.

If you work out the math, you'll see that each account has exactly a 1 in three chance at getting the cent.

Surprisingly (at least it surprised me), this works out with any amount to be allocated, and with any weighting.

For instance, assume we have 3 accounts with weights 1, 2, and 1 respectively. If we want to allocate 1 cent to these accounts, we would attempt to allocate ¼cents to the first account, giving it a 1 in 4 chance to round up. 3 out of 4 times, we'll move to the second account and give it a 2 out of 3 chance (2 is it's weight, and we consider only the remaining 2 accounts for a total weight of 3) at rounding up.

I worked through an interesting problem last night at the office.

One of our users was unable to reach the State of California's website. We recently installed a Squid proxy and he assumed the proxy server was blocking his request. He got a connection refused error reported back from Squid.

Comparing the captured packet headers between the successful and unsuccessful attempts I did discover a difference. The firewall box was sending a packet with the Syn flag set (as expected) which simply appears in tcpdump as 'S' in the flags field. The failed attempt from the Squid proxy box had flags 'SWE'.

A Google search turned up a useful hit:

That was indeed the problem. The Linux kernel configuration help file includes the following note:

Given the odd symptoms, I was very pleased to have been able to find and fix the problem in just a few minutes. Thanks goes to Nathan E Norman whose post on the debian-user mailing list provided the solution and to Google fantastic search engine for making it easy to find.

I'm a Debian user myself. For the time being, I've added the following line to the appropriate interface's section in /etc/networking/interfaces:

That seems to do the trick.

Mom has been boxing and sending Dad's books to me—hundreds of them. I've been working on a database to store information about Dad's books including a scanned image of each book cover, with a web interface. I'm using MySQL for the back-end database and Mason running under mod_perl for the web front end. More on the application development later.

Yesterday, I pulled one of Dad's books out a box at random. Tucked inside were several notes, including the following: 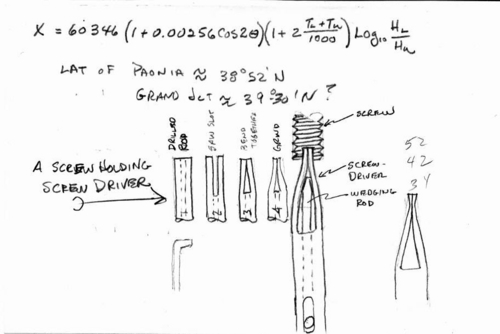 I find these notes of Dad's fascinating. I'm not sure what the formula at the top is all about (if you know, please e-mail me). The screwdriver diagram is particularly interesting. Is it an original idea—an invention on paper? Or did Dad draw it to document something he saw or remembered? I'll never know.

Dad would have considered this sketch nothing more than a doodle—something to pass the time. He certainly wouldn't have considered it presentable. I would give my eye-teeth to draw so well.

This morning, Jonathan Lundquist and I found and fixed a bug in the Squid Web Proxy Cache. I'm not sure about Jonathan, but it was my first, direct contribution to Open Source and a rewarding experience.

It took my knowledge of the Linux development environment, tools, and protocol for creating and submitting a patch; and it took Jonathan's excellent analysis and debugging skills to quickly locate the bug and suggest a patch. Individually, it may have taken either of us 2 days to find and fix the problem in totally foreign code. But together, we found it, fixed it, made a report including a patch in under 2 hours.

I think it is rare to find a working relationship that multiplies productivity that way. Several years ago, Jonathan and I wrote the first version of a Windows based application in a single 30+ hour session, passing the keyboard back and forth. That product has gone through many revisions with thousands of man hours invested, but the core of the application still consists of the code we wrote in those 30-some-odd hours.

Sadly, after 12 years working closely together, that working relationship will end, soon. Jonathan has accepted a position as CFO of for one of our clients. Good luck, Jonathan. I'll miss you most when debugging code on my own!

This site is the personal weblog of Marc Mims. You can contact Marc by sending e-mail to:
marc@questright.com.

Marc writes here about cycling, programming, Linux, and other items of personal interest.

This site is syndicated with RSS.

CSS stolen from Tom Coates who didn't even complain.